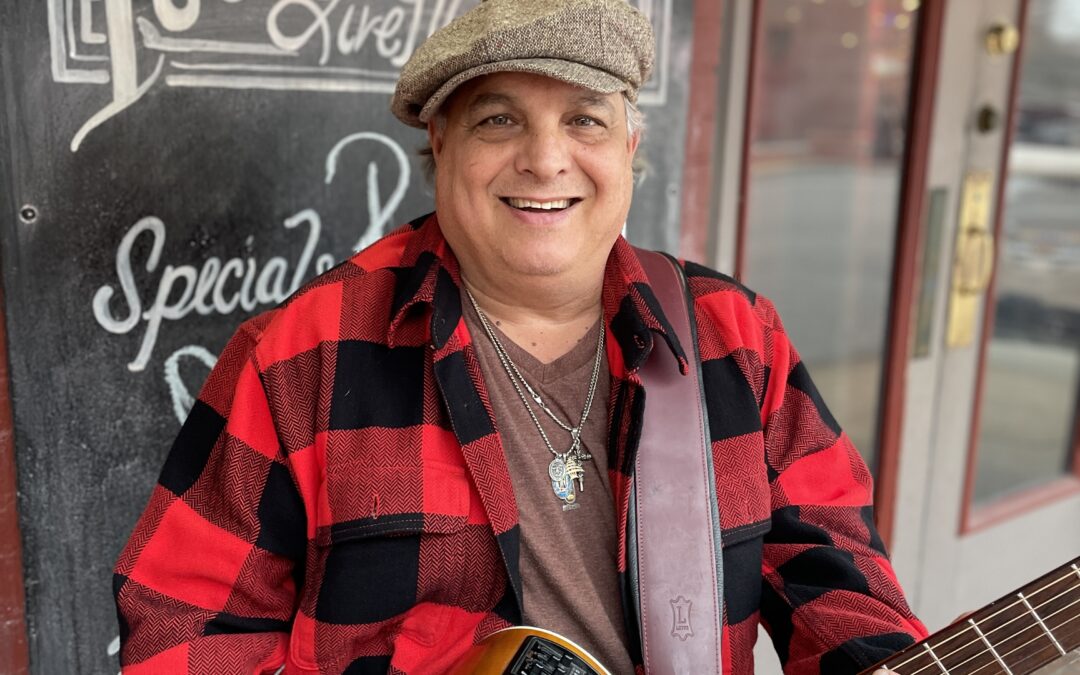 For over 35 years, 1860 Saloon, Game Room & Hardshell Café has hosted talented musicians from around the St. Louis metropolitan region and Midwest area. This is another article in a series highlighting the skilled and gifted singers, players and songwriters that take the stage in the 1860 Saloon room and contribute greatly to St. Louis’ reputable blues, rock and Motown music scene. Links to previous stories on our website are below.

Michael Thomas grew up in the nearby Fox Park neighborhood. As most kids growing up in the 1960’s, he started working at a young age, helping the neighbor couple prepare bushels of fruit and vegetables to sell in their Soulard Market produce stand. Music started early, with his mother filling the house with the sounds of Rodgers & Hammerstein. Then Rock & Roll, Blues and the British Invasion took a hold of him. At age 14, he started playing his first guitar and never let go.  The city’s musicians at the time were a huge influence, including Tommy Bankhead, Henry Townsend, Muddy Waters, Albert King, B.B. King and Howlin Wolf. By his 21st birthday Michael was playing blues in the Central West End and in the window of a Delmar loop bar called Georgia’s Cafe, with Thurman McCoy’s band. Thurman referred to his musicians as  “Big T & his travelin’ combo band”. Michael paid homage to those times and, in 1979, named his group “The Travelin’ Band”.

With Michael’s deep roots in St. Louis,  it would be hard to find a south St. Louis local that doesn’t know him and/or his fellow baby boomer sisters, Patti and Joanie. They’re very active in improving our community and all three have been a part of the 1860s family over the years.  In addition to playing music, Michael was a cook in the 80s and Joanie managed at 1860s for several years before she opened the successful Joanie’s Pizza and Joanie’s to Go in 1994. Patti has performed over the years in the 1860 Saloon with Michael in their band, Patti & the Hitmen. Another music group Michael and his friends formed, the Alley Mutts, plays acoustic music at events. For solo performances, he goes by “Travelin’ Lite Mike”. Ever the consummate musician, he loves learning new songs, and if someone tells him about a tune he may like, Michael will not sleep until he researches it online and learns it.

One of Michael’s favorite performance memories is the 1983 Mardi Gras.  This was Soulard’s first “big one” and he notes that Richard Marion, the previous owner of 1860s from 1983 to 2006, was an integral part of making the annual celebration grow to what it is today. And keeping with Marion’s approach, the tradition has continued, where, “At 1860s, you can feel at home, play what you want and not feel under the gun. Not do anything other than the best you can. The 1860s crowd is here because of the food, the atmosphere, the bartenders, and the music.” His two favorite dishes at 1860s are the Jambalaya (“I’m a retired cook and had many variations, including New Orleans & Memphis, and 1860s has the best.”) and the Blackened Chicken Salad. Outside of music, in his free time he cooks, grows vegetables and plants, and spends quality time with his longtime love, Julie, and family.

Thank you to Michael Thomas for spreading happiness to others through your love of entertaining.  Michael performs first Thursdays and third Wednesdays in the Saloon room as “Travelin’ Mike Lite” and most fourth & sometimes fifth Fridays with his Travelin’ Band.  He can be found on Facebook promoting his gigs and fun approach to life. “I’m here to entertain the people. That’s my job. And that’s what I get out of music the most…the energy you get from the people and the response.” Job well done, Michael Thomas.

Live music is performed at 1860 Saloon, Game Room & Hardshell Cafe 365 days a year, every night Monday through Friday and twice on weekends. The daily music schedule is on 1860saloon.com   Previously published stories on Tim Perry and Gene Jackson

There are three rooms, with one incredible menu, at 1860s.  The 1860s Saloon, with its antique wood back bar, is where the live music is performed.  Blues, Classic Rock and Motown performances ensure great entertainment. In the second room, groups converge at the 1860s Game Room bar for sports on the big screen, foosball, video games, shuffleboard and darts. It’s the perfect atmosphere for drinks, St. Louis-style pizza, and listening to TouchTunes. Want traditional restaurant style seating? Then the third room, The Hardshell Café, with a New Orleans courtyard feel and 500-gallon fish tank, is the place to be. During nice weather, relax at a table outside the café. From Cajun and Creole to traditional American fare, our menu items receive rave reviews.

Live Music in the Saloon, featuring Blues, Classic Rock, and R and B, every night of the year plus weekend afternoons