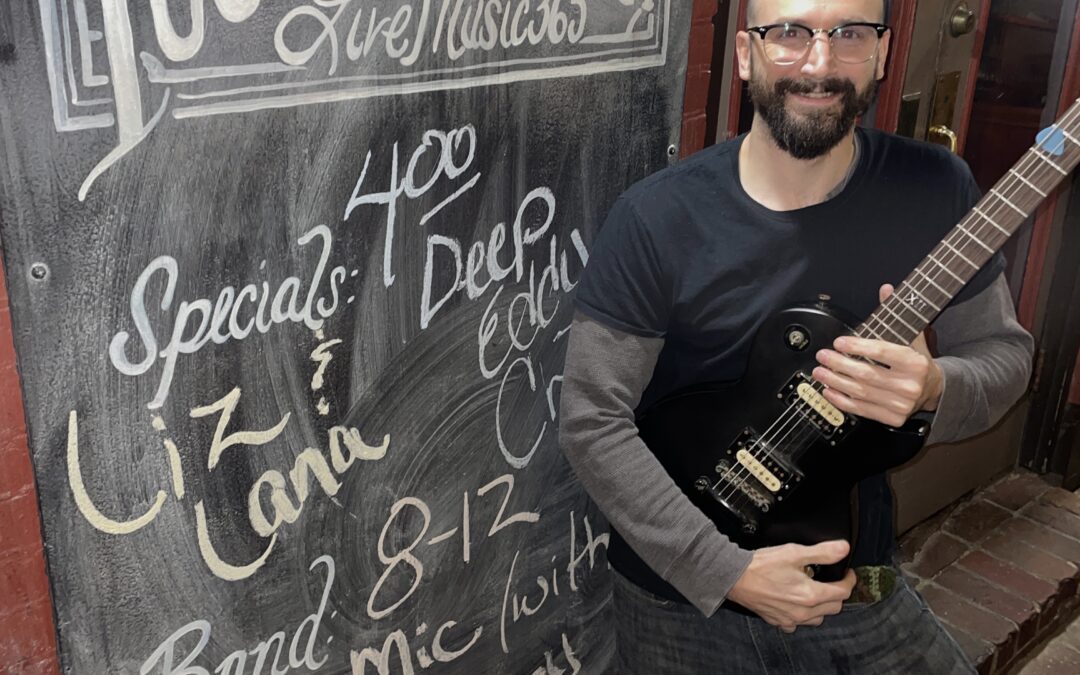 For over 35 years, 1860 Saloon, Game Room & Hardshell Café has hosted talented musicians from around the St. Louis metropolitan region and Midwest area. This is the first in a series highlighting stories of the skilled and gifted singers, players and songwriters that take the stage in the 1860 Saloon room and contribute greatly to St. Louis’ reputable blues, rock and Motown music scene.

Tim “Timmy” Perry has been a part of the area’s music community for over 15 years.  He had a great childhood growing up in Bloomfield, MO, about an hour south of Cape Girardeau. (Historical tidbit: it’s where Civil War soldiers started the U.S. military’s Stars and Stripes newspaper.)  His mom was a school superintendent and dad a pharmacist.

While earning an associate’s degree at nearby Mineral Area College, Tim met another musician, Richie Darling. Both moved to St. Louis and made Soulard a home base while they played open mic nights in bars in Webster Groves. Back then, Tim focused on the technical guitar riffs of Slash and Jimmy Page – “Probably too loud”, he admits, and left the singing up to Richie.

Fast forward to about six years ago when Tim met Tom Gullickson of 1860s. Tom had a vision of helping local musicians and Tim was all in to make that a reality. That’s when Tuesday Open Mic Night began. The weekly event has earned a reputation for being friendly and welcoming to musicians starting out or wanting to develop skills. Usually 20 or so people sign up to play and can sing up to three songs.  Tim knows the importance of getting a lot of performance practice before booking venues and he’s paying it forward. The Tuesdays now include a rhythm section to back up participants. Sometimes Curt Copeland and other musicians that play at 1860s join in on the fun.

“The best part of being a musician is making people happy. Hosting the Open Mic and mentoring fellow musicians makes me happy. 1860s is my favorite bar. It always has a great crowd.  Everyone is super friendly.  Join us Tuesdays if you’re looking to improve yourself, meet other musicians or start a band.”

Over the years, Tim has expanded his rock genres and enjoys drivin’ blues, among other styles.He encourages everyone to experience Open Mic. “Come on up! And the food is really good. One of my favorites is the BBQ Chicken Pizza.”

He and Richie still play together. One of his favorite memories was Mardi Gras a few years ago, when the two performed with the Diamond Cut Blues Band on the 1860s outdoor stage for the thousands in attendance. “Richie showed me that being a local musician or band goes beyond being able to play music. It includes things like acting professional, correctly running sound checks and booking gigs.”

Thank you to Tim Perry (@timmyperry1985) for contributing to improving the community with music and mentoring.  He also performs regularly with his band, Tim Perry & the Soulard Stumblers.  Open Mic Tuesdays are 8 p.m. to midnight,  at 1860 Saloon, Game Room & Hardshell Café, 1860 S. 9th Street, in Historic Soulard.  Live music is performed at 1860s 365 days a year, no cover, every night Monday through Friday and twice on weekends. The daily music schedule is on 1860saloon.com

There are three rooms (with one menu) at 1860s.  In the 1860s Saloon, with its antique wood back bar, is where the live music is performed.  Blues, Classic Rock and Motown performances ensure great entertainment. In the second room, groups converge at the 1860s Game Room bar for sports on the big screen, foosball, video games, shuffleboard and darts. It’s the perfect atmosphere for drinks, St. Louis-style pizza, and listening to TouchTunes. Want traditional restaurant style seating? Then the third room, The Hardshell Café, with a New Orleans courtyard feel and 500-gallon fish tank, is the place to be. During nice weather, relax at a table outside the café. From Cajun and Creole to traditional American fare, our menu items receive rave reviews.

Live Music in the Saloon, featuring Blues, Classic Rock, and R and B, every night of the year and weekend afternoons