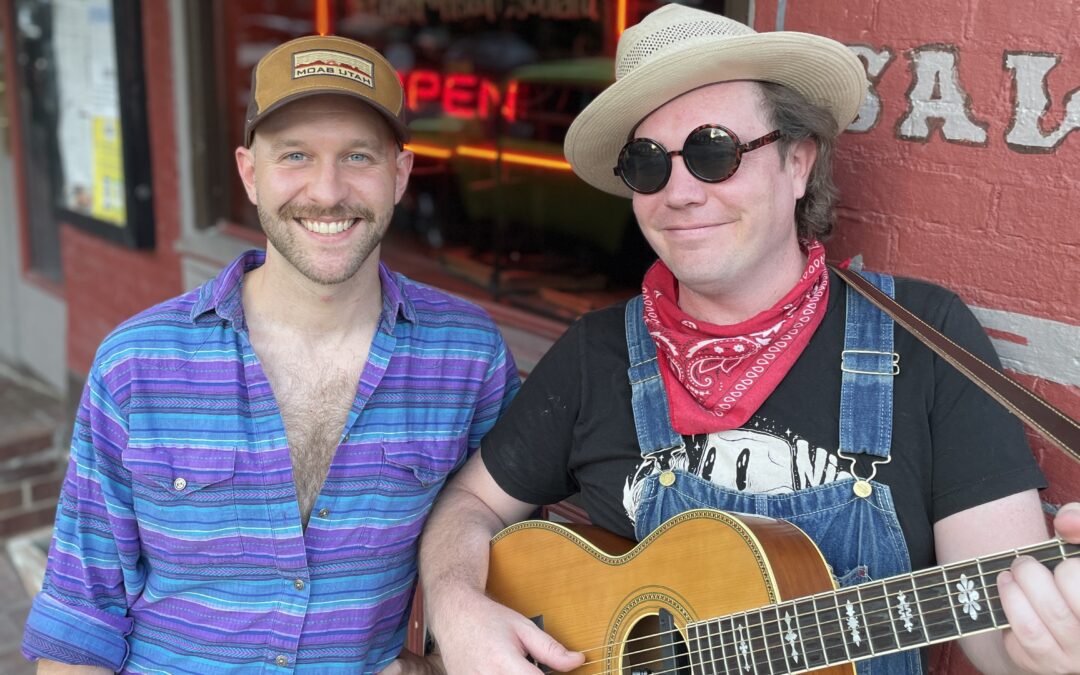 For over 35 years, 1860 Saloon, Game Room & Hardshell Café has hosted talented musicians from around the St. Louis metropolitan region. This is another article in a series highlighting the skilled and gifted singers, players and songwriters that take the stage in the 1860 Saloon room and contribute greatly to St. Louis’ reputable blues, rock and Motown music scene. Links to previous stories on our website are below.

Stop by on a Monday night in 1860 Saloon and immediately experience Nate Lowery and Dan Turner sharing their six-year music-filled friendship on stage.  The welcoming atmosphere and camaraderie, paired with musical talent, keeps fans staying longer, becoming new friends, and returning regularly to partake in fun.

Nate grew up outside Dallas, Texas and Dan grew up in Glen Carbon, Illinois and spent time in Utah before the two crossed paths at a a McGurk’s employee work event. They both grew up in musical families and enjoy playing, singing and performing the Americana genre, which includes music from the first half of the 20th century such as blues, folk, jazz, bluegrass, country and more. Nate was playing at an at an Open Mic Night at the old Joanie’s Restaurant on Russell Avenue six years ago and was told the Americana sound would be a great fit for the Saloon. The two musicians did not disappoint and 1860s customers appreciate their talents.

Asked about performing at 1860s, Nate and Dan said the best part, of course, is the bartenders keeping them and the customers fed and hydrated. The crowd is nice, relaxed and laid back. The sound system and the acoustics are good. The room is big and open with room to move around and see everyone. And it actually has a stage! Each Monday they play 50 to 60 songs, rotating from a wide collection, with a different set each time.  (Be on the lookout for their popular “Home Grown Tomatoes” song.) They shared a favorite memory playing at 1860s.  During a going-away gig, the crowd sat down around the stage,  cross-legged like in elementary school, and swayed to the tunes. Ah, those wonderful moments when there are no worries.  But many of the best nights are when new people show up, change plans in order to stick around longer, and friendships begin.

Nate’s favorite menu item at 1860s is the Geyer Street Chicken Po’ Boy or Garlic Cheese Bread Roast Beef sandwich.  Dan’s is the Spicy Chicken Wrap and salad.  Outside of music, Nate spends time crafting original and creative figurines. See his custom work and contact him for special orders on his Facebook page https://www.facebook.com/Loweryheirloomfigurines Dan is a fan of camping and traveling. His favorite spot is Hawn State Park just outside of St. Louis in Ste. Genevieve County. https://mostateparks.com/park/hawn-state-park

In a world of increasing electronic, impersonal communication, Nate and Dan are a refreshing, needed in-person connection that creates positive energy. Natchez Whistle perform Monday nights in the Saloon room from 8 p.m. to midnight.  There is no cover charge.

There are three rooms, with one incredible menu, at 1860s.  The 1860s Saloon, with its antique wood back bar, is where the live music is performed.  Blues, Classic Rock and Motown performances ensure great entertainment. In the second room, groups converge at the 1860s Game Room bar for sports on the big screen, foosball, video games, shuffleboard and darts. It’s the perfect atmosphere for drinks, St. Louis-style pizza, and listening to TouchTunes. Want traditional restaurant style seating? Then the third room, The Hardshell Café, with a New Orleans courtyard feel and 500-gallon fish tank, is the place to be. During nice weather, relax at a table outside the café. From Cajun and Creole to traditional American fare, our menu items receive rave reviews.

Complimentary Shuttle to Cardinals & Blues Games and many concerts. Skip the expensive lots and start in Soulard!

Live Music in the Saloon, featuring Blues, Classic Rock, and R and B, every night of the year plus weekend afternoons