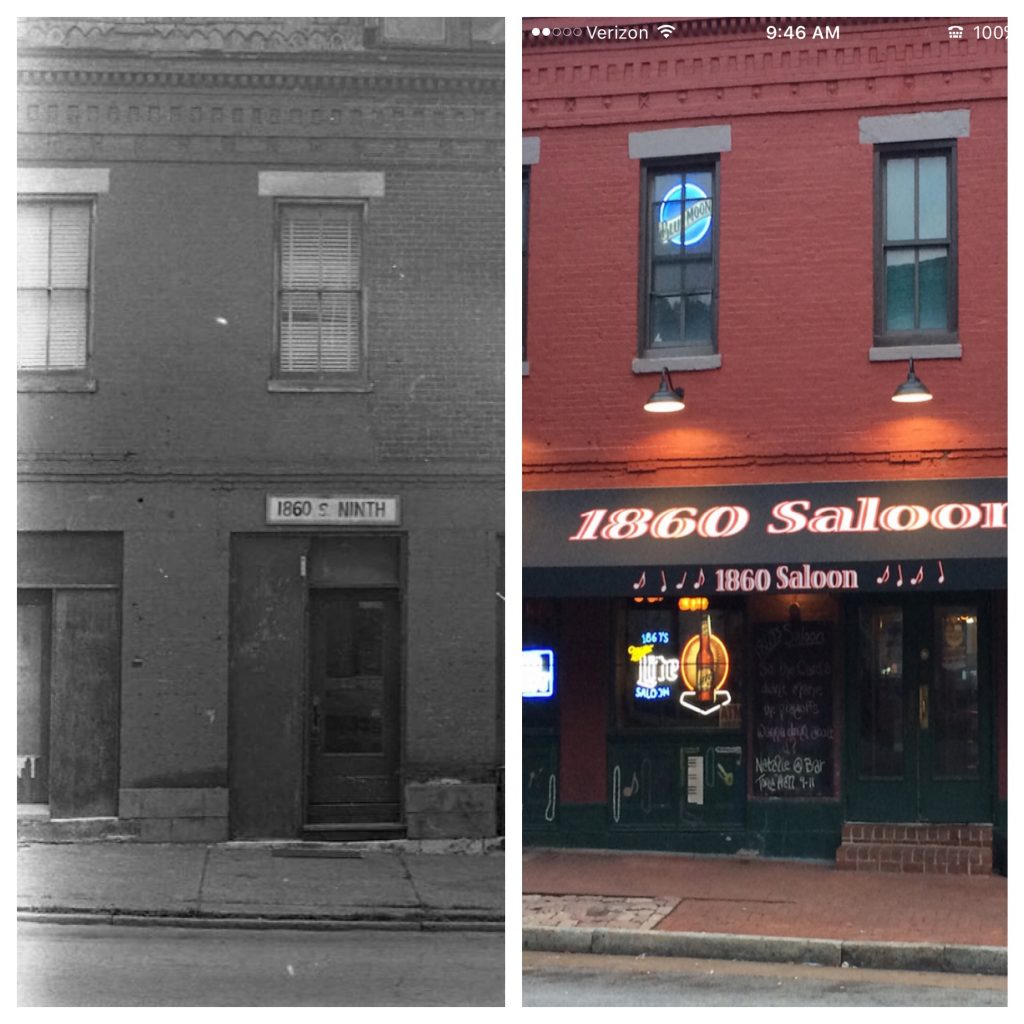 The original building was built in the late 1800’s as a two-family town house with two separate entrances (1858 – 1860 S. 9th St.).  In the early 1900’s the south side residence was converted to commercial space with the north side preserved as the living quarters for the commercial space proprietors. Over the years the commercial side of the building has been a bakery, butcher shop, confectionery, and, in the 1960’s, a storefront church. The two spaces were eventually made into one space and became a tavern.

The attached picture was during this time period. In early 1980’s Richard Marion bought the building for $15,000; changed the front entrance to one door and the name to Marion’s 1860’s Tavern. The inside remodel included the addition of a stairway to the second floor (the opening in the ceiling when you walk in the 1860’s Saloon front door is where the stairway was located), the historic back bar and the vintage Budweiser neon sign.

The tavern did not have food at this time. In 1989, what is currently the Game Room was added with a full kitchen. The exposed beams are from old railroad tresses, which were dismantled in the 1970’s and 80’s when the railroads were in decline. When this room was finished the tavern’s name was changed to 1860’s Hardshell Café & Bar.

In 1992 construction began on what was to be a garden area on the east end of the building.  Original plans called for an open-air building without a roof.  By the time the project was finished there was a plastic roof along with weatherproof doors and windows. A unique feature is that the concrete floor was installed with heat pipes underneath so the snow and ice would melt off when bad weather prevailed.

The system is still used today on cold winter nights to heat the floor.  The plastic roof let in a lot of light, but never seemed to keep the rain out. The roof was replaced in 2013 with beautiful reclaimed wood from an old warehouse in North County. This space is now called 1860’s Hardshell Café, but the locals still call it “60’s Patio”. We thank our customers for being a part of the historical journey. Here’s a toast to the future!  Tom Gullickson For the full article see us on STLRestaurant.News

Thank you for your interest in applying to 1860 Saloon, Game Room, & Hardshell Café. We’ve proudly served in historic Soulard over 35 years and earned a reputation for friendly service, great food, and a fun atmosphere. We hire and reward team players that “do what they say and say what they do,” show up with a positive attitude, and have a strong work ethic.

If you are interested in joining our team on an hourly basis, please stop by Tuesday thru Friday between 2:30 p.m. and 4:00 p.m. to fill out an application. Most days we are available to discuss employment opportunities at that time.